A simple way to model rankings with Stan

I wrote what I thought it was the generative process for some modeling work, and it looked too common to not have a name, so I started to ask around in Twitter:

One useful clue was this one:

If I understand you correctly, the situation is similar to a (literal) horse-race, as modeled here: https://t.co/TGGS1h4xxe

It turns out that the distribution that I was describing is in general used for rankings or ordered data and it is called an exploded logit distribution.1

In this post, I’ll show how this model can be fit in the probabilistic programming language Stan, and how it can be used to describe the underlying order of ranking data.

I’m going to load some R packages that will be useful throughout this post.

One way to get a ranking of exemplars of a category, for example, is to present them to participants and ask them to order all (or a subset) of them (see Barsalou 1985).

Let’s say that we want to know the underlying order of pizza toppings. For the modeling, I’m going to assume that the toppings are ordered according to an underlying value, which also represents how likely it is for each topping to be the exemplar of their category.

To get a known ground truth for the ranking, I’m going to simulate an order of pizza toppings. I assign probabilities that sum up to one to the toppings by drawing a random sample from a Dirichlet distribution. The Dirichlet distribution is the generalization of the Beta distribution. It has a concentration parameter, usually \(\boldsymbol{\alpha}\), which is a vector as long as the probabilities we are sampling (25 here). When the vector is full of ones, the distribution is uniform: All probabilities are equally likely, so on average each one is \(\frac{1}{vector \text{ } length}\) (\(\frac{1}{25}\) here). By setting all the concentration parameters below one (namely \(.2\)), I’m enforcing sparsity in the random values that I’m generating, that is, many probability values close to zero.

These is the true order that I’m assuming here:

Essentially, we expect something like this to be happening.

With \(\Theta_{toppings}\) representing the different probabilities for each topping. The probability mass function of the categorical distribution is absurdly simple: It’s just the probability of the outcome.

We can simulate this with 100 participants as follows:

And this should match approximately P_toppings.

True, but one motivation for considering ranking data is the amount of information that we gather with a list due to their combinatorial nature. If we ask participants to rank \(n\) items, an answer consists in making a single selection out of \(n!\) possibilities. Ordering 7 pizza toppings, for example, constitutes making a single selection out of 5040 possibilities!

Now we need to exclude the first topping that was given, and draw another sample from a categorical distribution. (We don’t allow the participant to repeat toppings, that is, to say that the best topping is pineapple and the second best is also pineapple). This means that now the probability of the topping already given is zero, and that we need to normalize our original probability values by dividing them by the new total probability (which will be lower than 1).

where \(\Theta_{[-i]}\) represents the probabilities of all the outcomes except of \(i\), which was the first one.

And this is the exploded logit distribution.

This process can be simulated in R as follows:

If we would like to simulate 50 subjects creating a ranking of the best 7 toppings, we would do the following:

We have simulated ranking data of pizza toppings, can we recover the original probability values and “discover” the underlying order?

To fit the model in Stan, I’m going to create a custom probability mass function that takes an array of integers, x, which represents a set of rankings, and a vector of probability values, theta, that sums up to one.

The logic of this function is that the probability mass function of a ranking \(\{i,j,k, \ldots, N \}\) can be written as a product of normalized categorical distributions (where the first one is just divided by 1).

For Stan, we need the log-PDF. In log-space, products become sums, and divisions differences, and the log of \(\sum \Theta\) will be zero:

The following Stan custom function follows this logic but iterating over the rankings. In each iteration, it aggregates in the variable out the addends of the log probability mass function, and turns the probability of selecting again the already ranked element to zero.

The whole model named exploded.stan includes the usual data declaration, the parameter Theta declared as a simplex (i.e., it sums to one), and a uniform Dirichlet prior for Theta. (I’m assuming that I don’t know how sparse the probabilities are).

Let’s see if I can recover the parameter values. 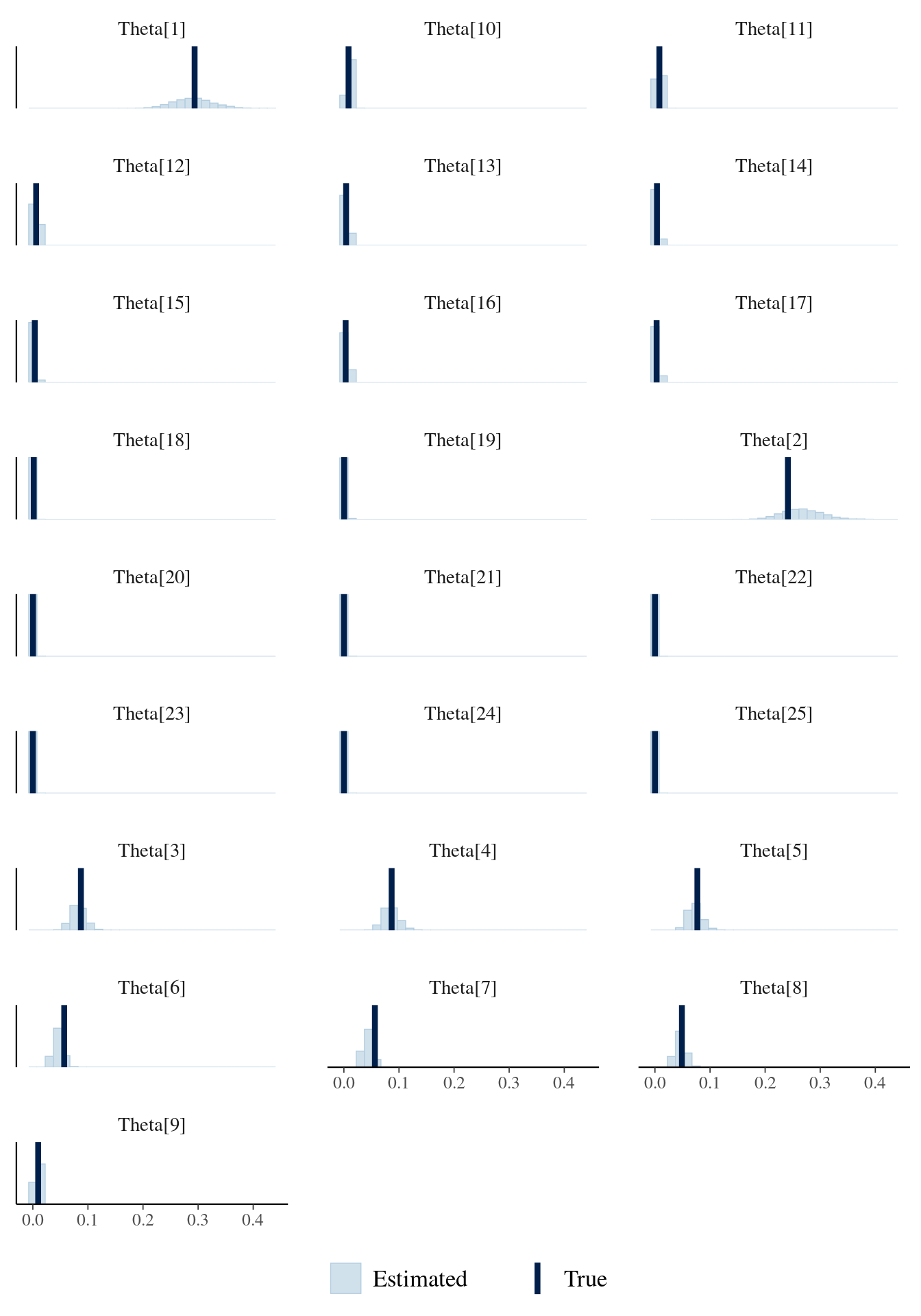 It looks reasonable. However, if we really want to be sure that this is working, we should probably use simulation based calibration (Talts et al. 2018).

What is this good for?

This super simple example shows how to get an underlying ranking based on a set of responses from a number of subjects. It’s straightforward to adapt this model to data from participants ranking elements from different sets of the same size (e.g., 7 out of 25 toppings, 7 out of 25 tools). It’s a little less straightforward if the sets are of different sizes, e.g., rank 7 toppings out 25, but 7 tools out 50. This is just because Stan doesn’t allow ragged arrays. See here some tips for implementing the latter model.

Could this be used as a cognitive model of people’s rankings?

Maybe. And I enter here in the realm of half baked research, ideal for a blog post.

Lee, Steyvers, and Miller (2014) show the implementation of a cognitive model for rank order data from the latent knowledge of participants, which is based on Thurstonian models (Thurstone 1927, 1931) fitted with Bayesian methods in JAGS (Johnson and Kuhn 2013).

The exploded logit model seems to be closely related to the Thurstonian model. The Thurstonian model assumes that each participant assigns an underlying score to each item of a set, which is drawn from a true score with normally distributed error. The score determines the order that the participant gives. We can think about the exploded logit similarly. While I modeled the underlying ranking based on probability values, one could assume that each participant \(s\) had their own score \(mu_{is}\) for each item (or pizza topping) \(i\), which is built as a common score \(mu_i\) together with some individual deviation \(\epsilon_{is}\):

If we assume that \(\epsilon_{is}\) has a Gumbel distribution, then the probability of \(\mu_{is}\) being ranked first out of N options is determined by a softmax function:

where \(\mu\) is the vector of scores for all elements of the set.

And the probability of ordering \(j\) second is:

These last equations are essentially the same categorical distributions that I used before in (2) and (3), but the softmax function converts the unbounded scores into probabilities first. However, with the exploded logit, the error term goes away leading to a more tractable model. This is not the case for the Thurstonian model. The Thurstonian model is more complex, but at the same time we gain more flexibility. With the error term, the Thurstonian model can incorporate the reliability of the participants’ judgments and even correlations, which, as far as I know, can’t be included in the exploded logit model.

For attribution, please cite this work as